On the occasion of the Black Friday, Garden Òrchid offers a 25% discount on the 6 Pleione kit, to embellish your gardens and balconies without ruining you!

From Friday November 24th to Sunday November 26th at midnight, the promotional code BLACKF2017 will allow you to benefit from this magnificent promotion! 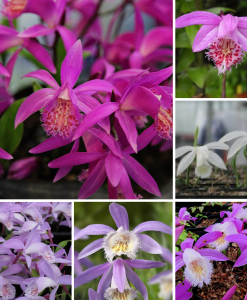 The young Pleione Orchid shoots develop in March/April and flower in the spring. After flowering, the plant continues to develop its foliage and to mature its bulbs. Come the autumn, Pleiones go into their winter dormancy, and the leaves yellow, fade and disappear. Over the years, the bulbs divide to form increasingly large masses.

Outdoor Orchid assortments of Orchids allow you to vary the colors while keeping a uniformity of flowers! Each variety is delivered in 11 cm pots containing 2 to 3 rooted bulbs. Each bulb will give 1 to 2 flowers.

The new Pleione shoots usually appear during April; except for Cypripedium formosanum, more precocious, which often emerge at the beginning of March which emerge later. Once started, the vegetation grows very quickly; in 3 to 5 weeks, the foliage has opened out.

The flowering extends from the end of April to the beginning of June. At the end of the summer, the foliage yellows then fades before disappearing completely. Pleione then go into their winter dormancy. When the leaves have completely faded, the stems can be cut, preserving a height of 5cm. Take care not to damage any possible new shoots that are already present.

The Pleiones are certainly the most spectacular terrestrial garden orchids. This genus is composed of more than 40 species distributed throughout the world and has a great variety of sizes and colours. These hardy orchids are characterised by majestic flowers that “resemble” a clog.