Bletilla Ochracea is a rare orchid of ochre yellow and orange color which reaches 50 to 80 cm in height.

It flowers in June, July and withstands -20° in a part of the garden half sunny, half shaded. .
It is delivered in 1 pound jars as a mature plant, to flower in the year.

You can use the OCHRA2017 code to enjoy -10% off the Bletilla Ochracea until Sunday, November 12th at midnight! 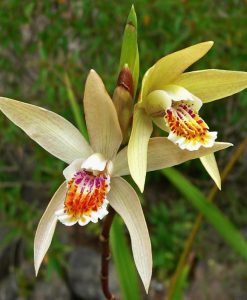 Bletilla orchids persist in the form of underground bulbs during the winter dormancy period. The bulbs will then start developing their new shoots in April. A bouquet of long leaves then appears. Then 6 to 10 flowers appear during the summer, worn in loose spikes along the floral stem. After having brightened the garden for about a month, the flowers disappear, but not the foliage. At least not at once, it only fades in November. The plant then disappears completely from your sight and its pseudo-bulb goes into dormancy until the following spring.

This specificity of hyacinth orchids is also an invitation to plant them in pots to embellish terraces and sunny balconies.

We strongly advise you to replant the’ Bletilla’ orchids as soon as possible after the reception. It is not advisable to leave the garden orchid in its pot of culture because it is then more sensitive to heat and the summer drought or winter cold.

The ideal planting period is late summer or fall. This will give them the opportunity to settle before winter and develop their new stems in the spring. Never store Bletilla in a house or greenhouse. They need cold periods to develop later.
Dig a large planting hole about 15 to 20 cm deep. Bletilla orchids tend to spread over the years, so leave about 20 cm between each plant.
A soil rich in humus, light and well drained, has their preference. Drainage is important because their pseudo-bubble is sensitive to stagnant moisture. If your floor is compact, don’t panic! Prepare a planting hole lined in the bottom with a drainage layer (lava stone).
The use of fine lava stone or pumice will allow the substrate to remain moist even during dry periods. A simple substrate can be made by mixing about 1/3 lava stone or pumice, 1/3 good quality humus and 1/3 garden soil.
Remove the growing pot and place the plant in the hole. Make sure that the root ball is level with the surrounding soil surface. Make sure that the mound is in contact with the surrounding soil and then water abundantly for the first few days (especially in case of drought).
The addition of a fertilizer rich in potassium will ensure a good replenishment of reserves and therefore a better flowering the following year. This contribution can be made during the vegetation phase from April to the end of September.